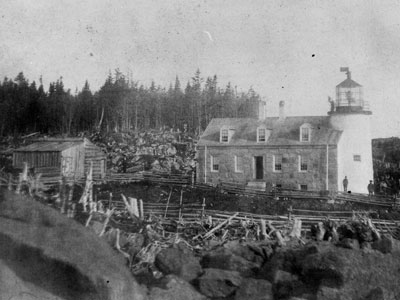 The first lighthouse at Little River was built in 1847. It was a stone tower attached to a granite keeper’s house. In 1876 the stone tower was torn down and replaced with a cast iron tower (brick lined), which still stands today. At one time, the lighthouse was painted red, with a black lantern. Today the lighthouse is painted white with a forest green lantern. 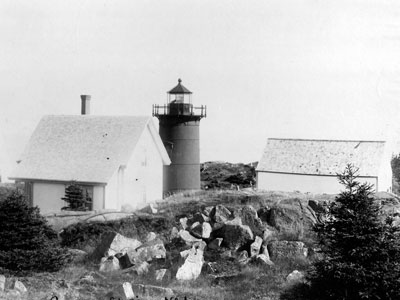 A vintage view of the present day tower and keeper’s house (the barn to the right is no longer standing).
(FLRL photo)

For safety reasons (fire hazard) the government built an oil house at the site in 1905. It was constructed from some of the left over stonework that was part of the original tower. Over time, various types of fuel were used to light the beacon in the tower, including whale oil and kerosene. When electricity came to the island the oil house was no longer needed for its intended purpose. The building was then named “The Paint Locker.”

There were two different fog bell towers at Little River Lighthouse, though sadly, neither survives today. However, the original fog bell is on display in the Cutler Town Circle. 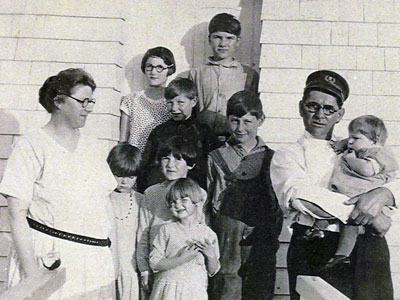 Keeper Willie Corbett and his family served at Little River Light Station from 1921 to 1939.
(FLRL photo) 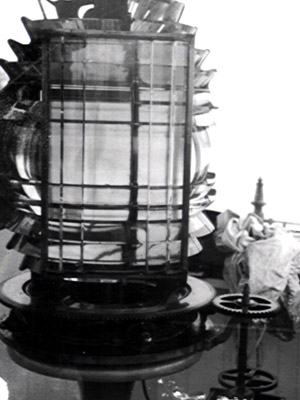 A view of the fifth order Fresnel lens that was in place at Little River for many years.
(USCG photo)

The lighthouse was originally equipped with a fifth order Fresnel lens as its optic. In 1975 the classical lens was removed and replaced by a modern optic atop a steel skeletal tower near where the present day foghorn and solar panels are now situated. The whereabouts of the Fresnel lens remains a mystery to this day.

After the station was automated the Coast Guard left the island and the government attempted to maintain the station with caretakers, an arrangement they eventually discontinued. The historic light station structures were then boarded up and abandoned. 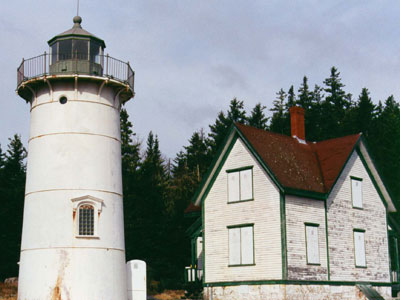 A view of Little River Light Station prior to ALF stepping in to restore the historic structures.
(FLRL photo)

In June of 1998 the Maine Lights Program transferred over 30 of the state’s lighthouses from Coast Guard ownership to nonprofits, local municipalities and state and federal agencies.

Although Little River Lighthouse was offered for adoption under the Maine Lights Program, again, no one stepped forward to take ownership of the light station. In the fall of 1998 Maine Historic Preservation declared the Little River Light Station as one of the “Ten Most Endangered Historic Properties” in the state. 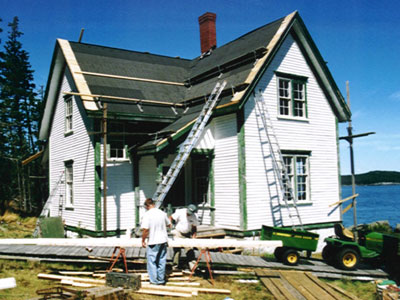 After obtaining a license from the Coast Guard, ALF worked hard to restore each of the light station’s historic structures, including the keeper’s house pictured here.
(FLRL photo)

By 2000, there was the real possibility that the lighthouse might eventually be declared excess property and sold to the highest bidder if a nonprofit caretaker could not be found.

It was during this time that the nonprofit American Lighthouse Foundation (ALF) stepped forward and was granted an historic preservation license from the U.S. Coast Guard for the light station.

During the same time period, the United States Congress, which realized the plight of America’s lighthouses, passed the National Historic Lighthouse Preservation Act of 2000. This Act provided equal opportunity for nonprofits to compete with government agencies in applying for ownership of lighthouses. 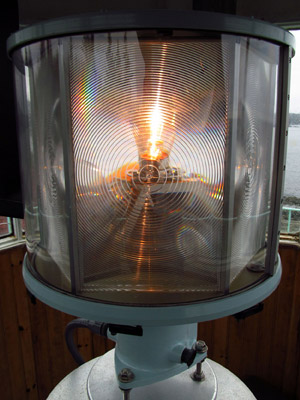 Thanks to the restoration efforts of ALF, the Coast Guard agreed to reestablish a light back in Little River Lighthouse during 2001.
(Photo by Bob Trapani, Jr.)

In 2001, the American Lighthouse Foundation proceeded with the restoration of the light tower, boat ramp and wooden walkway on the island. These achievements met the Coast Guard’s criteria for reestablishing a light in the historic lighthouse, which had been decommissioned in 1975.

In October 2001, ALF held a relighting ceremony for Little River Lighthouse and dedicated the light tower as a “Beacon of Freedom to the World.” The relighting ceremony was designed to serve as a dual ceremony, honoring those who lost their lives in the terrorist attacks of September 11, 2001, as well as honoring the memory of the people of the United States Lighthouse Service and the United States Coast Guard who served at Little River Lighthouse.

In October 2002 ownership of the 15-acre island and the light station structures (lighthouse, keeper’s house, oil house and boathouse) were transferred to the American Lighthouse Foundation. 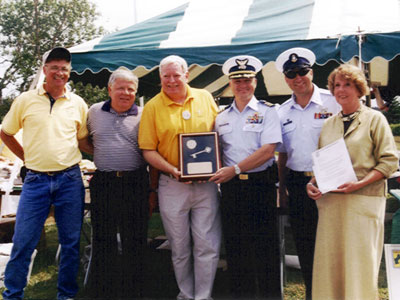 Little River had the distinction of being the first lighthouse in New England, and the third lighthouse in the United States, to have its ownership transferred to a nonprofit group under the National Historic Lighthouse Preservation Act of 2000. The extensive application for ownership to the United States Department of the Interior was compiled on behalf of the organization by ALF President Timothy Harrison (1994-2007). 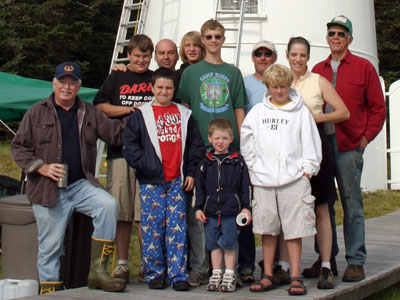 The Boy Scouts have contributed much in the way of time and efforts at Little River Light Station since 2006.
(Photo by Kathleen Finnegan)

In August 2006 (and again in 2007) a Boy Scouts troop from southern Maine completed a wide variety of projects on the island, including work on trails, removing rocks from the lawn, cutting back brush and helping with general maintenance projects at the light station.

In other noteworthy firsts, the Cutler United Methodist Church held the first-ever community worship service at the island on Sept. 3, 2006. In August 2007, Dave and Cheryl Corbett, being the high bidders for an overnight stay with a lobster dinner, became the first paying guests to spend the night on the island. In August of 2007 the Friends of Little River Lighthouse was officially formed as a chapter of the American Lighthouse Foundation. 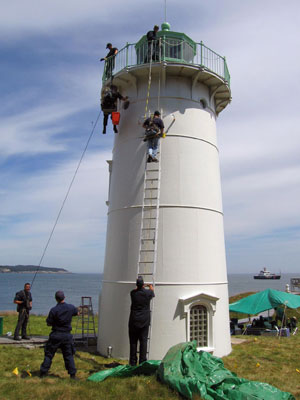 The U.S. Coast Guard has volunteered their services at Little River on a few occasions.
(Photo by Ann-Marie Trapani)

Since October 2001, many volunteers have helped immensely with the restoration at Little River Light Station, including Coast Guard personnel from USCGC ABBIE BURGESS and USCG ANT Southwest Harbor who volunteered on several occasions at the island.

It would be impossible to list and thank everyone who gave of their time and talents from 2001 to the present day; however, we would be remiss if we didn’t recognize the major role that volunteer Hal Biering had on the restoration effort.

Hal Biering, who along with his wife, Betty, came from Alabama to Maine and spent five summers working at the island on a near daily basis. A deep debt of gratitude is owed to Hal and to all those who have helped in ways both big and small to save this historic light station. 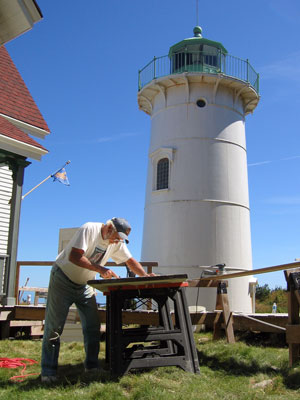 In recent years, ALF’s Friends of Little River Lighthouse has been hosting open houses on the island, which include tours of the light station buildings and historical interpretation. An average of one thousand people visit the island on an annual basis, which is a wonderful number for such a remote, offshore site.

Though the restoration of Little River Light Station was completed in 2008, the light tower, keeper’s house and other structures require ongoing care to ensure their preservation. To this end, the Friends of Little River Lighthouse carried out an important repainting project in 2014.

Bert Preston Painting, who prepped, primed and repainted the cast iron lighthouse and wooden keeper’s house, did a fine job on the project, which was funded in large part by a grant from the Davis Family Foundation. 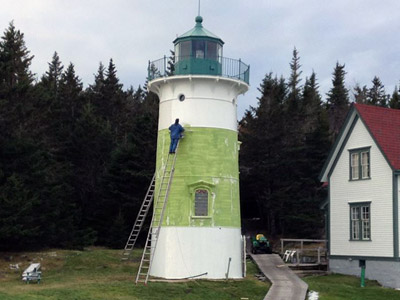 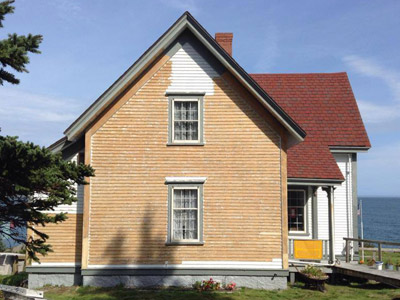 The keeper’s house was prepped, primed and repainted (and rotted wood repaired) during late 2014.
(FLRL photo)

The American Lighthouse Foundation and its local chapter, Friends of Little River Lighthouse, are committed to ensuring Little River Light Station is preserved for future generations and that this wonderful historic site and island can be enjoyed by the visitors through educational / public access programs and overnight stays. 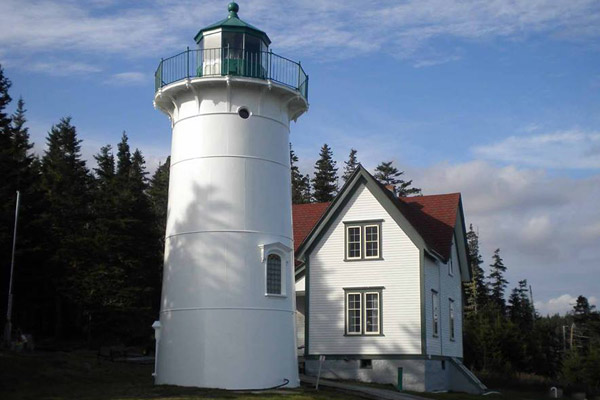 Thanks to the efforts of ALF’s Friends of Little River Lighthouse, the light station is gleaming once again following their late-2014 work projects at the island.
(FLRL photo)

Sign Up for Email Updates
For Email Marketing you can trust. 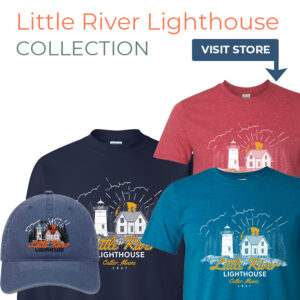